Returning to Mercedes-Benz Fashion Week Berlin was Serbian-born Sasa Kovacevic with his contemporary label Sadak. With looks and outfits aimed at the urban youth culture, whilst including ethnic elements, the brand offered an eclectic mix. 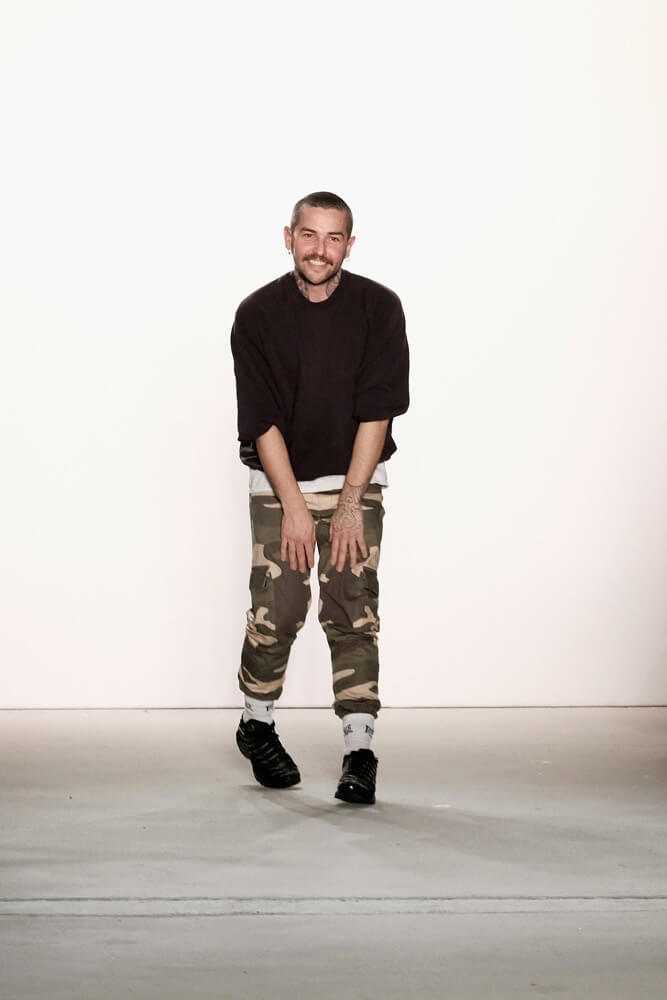 Having studied both fashion design and costume design, Sasa seems to have a taste for the wow-effect, as each collection is provocative and dramatic to please his audience. With this new autumn/winter 2017 collection, the designer has once again proved he is not afraid to take risk and challenge the norms. Gender blurring and rule breaking, these new looks had everything to be talked about.

The gender fluid aspect was both highly noticeable, but also discretely nodded to. First, both male and female model shared the designer’s outfits, who did not follow their assigned gender in dressing men in long black skirts, red dress dungarees, and long grey and beige aprons. One of the highlight was probably the male model who came down the catwalk in white platform heels, wearing perfect makeup and slick back long hair. Other elements such as see-through tops and open backs all played a part in this gender blurring philosophy.

On a more subtle note, the idea of sexuality was also played with. Three male models wore bright red outfits, a colour usually associated with passion and sex, and one of them wore it in the form of vinyl, long, dress dungarees. Headpieces worn over the head and intricate knots and string manipulations also evoked the idea of sex and S&M.

Overall, there was a lot of youth culture references. The models had tattoos and piercings and were from all kinds of ethnicities, probably showing a will to represent young people around the world, and that they might not be that different to one another. Whether from America, Eastern Europe or Asia, Sadak’s youth was inspired by 80s sportswear and wore it well.

With his autumn/winter 2017 collection, Sadak’s designer reflected upon complex notions, such as gender, sexuality and identity. But more importantly, he depicted a youth that was united in its differences. Coming out of his show, we, above all, had a feeling of accepting and understanding one another.